I have been a fan of archaeology adventure movies since I saw Indiana Jones digging up the Arc of the Covenant. Not far behind that was Romancing the Stone with a romance writer having an unplanned adventure in the jungle.

Fast forward to 2022, where we have Sandra Bullock playing the romance writer. However, Channing Tatum isn’t playing Michael Douglas’ character. 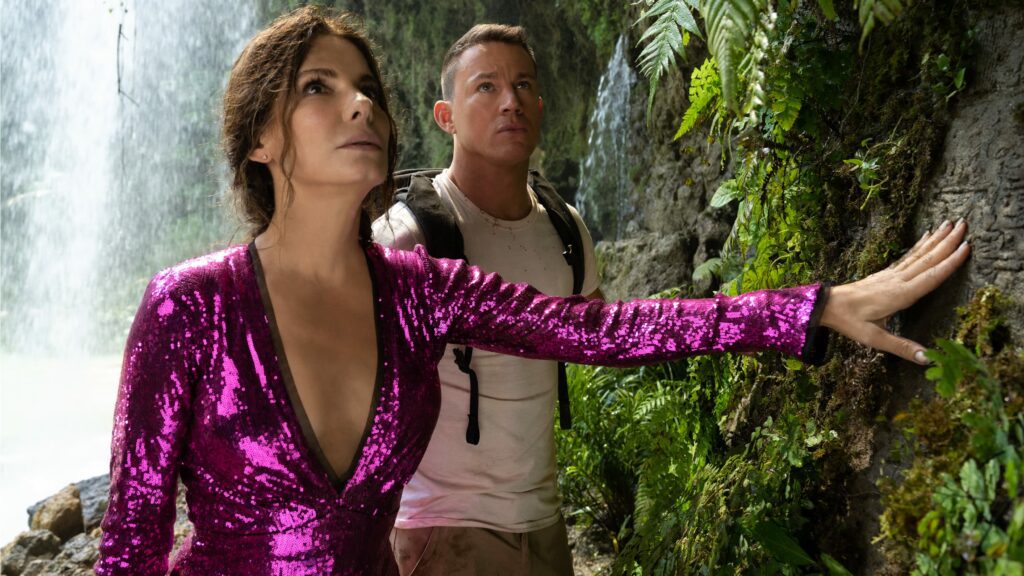 Sandra Bullock plays Loretta Sage, a successful romance novelist and Alan Caprison (Tatum) is her Fabio-esk cover model for her book’s romantic interest ‘Dash McMahon’. He has made a career of playing Dash for photo shoots and book tours.

Loretta is strongly encouraged to finish her book and start a publicity tour organised by her editor, Beth (Da’Vine Joy Randolph) and social media manager Allison (Patti Harrison). Loretta is stressed out, struggling with deadlines and the publicity side of it all.

Just as Loretta Sage is thinking of giving up writing, wealthy archaeology enthusiast Abigail Fairfax (Daniel Radcliffe) kidnaps Loretta to translate ancient hieroglyphic like language. Alan decides to try and save her. He may have muscles for his photo shoots but he isn’t much of a fighter.

He outsources the rescue work to ex-Navy Seal, Jack Trainer, beautifully captured by Brad Pitt. Brad has the real flowing blond locks and can handle himself in a fight.

The adventure takes place on a tropical Island with a ready to erupt volcano and thick jungle. Sandra and Channing bounce nicely off each other in the adventure with plenty of funny moments.

It is filmed on location in the Dominican Republic. There are nice performances from Cuban American Oscar Nunez playing rogue cargo pilot Oscar and Dominican Hector Anibal playing Rafi, one of Fairfax’s hench men.

As a last thought, I just wanted to mention to look out for the leaches because it isn’t as gross as it sounds.