There are three scenes from the original Jurassic Park movie that I remember very strongly.

All three scenes left us a gasp at the technology they had created for the movie.

That brings us to the sixth and final movie in the Jurassic Park/World series. Starting in 1993 with Jurassic Park, our heroes are Alan Grant (Palaeontologist), Ellie Sattler (paleobotanist) and Ian Malcom (chaos theory mathematician). Over the next 27 years, the main heroes have become Owen Grady (Chris Pratt) as an animal behaviourist and Velociraptor trainer and Claire Deering (Bryce Dallas Howard) from the Dinosaur Protection Group and their adopted daughter Maisie Lockwood (Isabella Sermon). 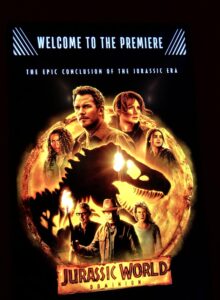 In Jurassic World: Dominion, everyone comes together in a ripping adventure where dinosaurs, humans and animals must learn to live together. Problems appear when the Genetic engineering company, Biosyn Genetics gets greedy and start fiddling with genetics and DNA.

As Ian Malcolm said “Your scientists were so preoccupied with whether they could, they didn’t stop to think if they should.”

Some extra characters join the team with Kayla Watts (DeWanda Wise) as the feisty contraband pilot and Ramsey Cole (Mamoudou Athie), an employee of the Biosyn Genetics. Dr Barry Wu (Bradley Wong), is the lead geneticist behind the dinosaur cloning programs at Jurassic Park and in Jurassic World, returns to work for Biosyn Genetics. 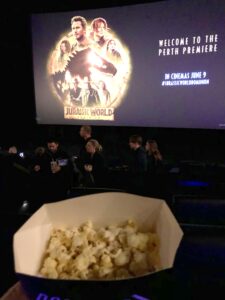 As with any Jurassic Park/World movie, it is packed full of adventure, amazing dinosaurs, and extreme stunts. It will never have the same impact as the original Jurassic Park, but it was an entertaining movie, nonetheless. And it was great to see the band back together, combining Jurassic heroes of different eras in one movie.

Thank you to UniversalAU for inviting us to the premier in Perth.