Twelve years ago, a period drama started on television. I am not that into period dramas but after watching one or two of these episodes, I was hooked. Downton Abbey followed an aristocratic family from 1912-1926. We became attached to the family and the staff of this English country estate. 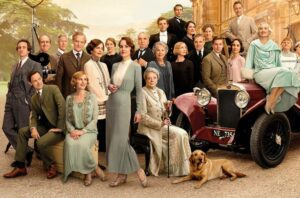 The matriarch of the family is Dowager Countess Grantham, played beautifully by Maggie Smith. It is this character who triggers the storyline for the movie, Downton Abbey, A New Era.

Without giving anything away, the countess has inherited a French country house by a man she spent a week with in her youth. While some of the family, visit the newly inherited villa with its attached stories, Downton Abbey is being used as a movie set. It’s late 1920s, when the movie making industry was thrown into turmoil during the transition from silent movies to talkies. The movie flicks back and forth between Downton Abby and the gorgeous villa in the South of France. 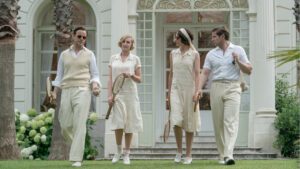 As with all Downton episodes and movies, it has a huge cast of familiar characters, all having their own story within the greater saga. Whether it the connection between Butler Barrow (Guy Dextor) or Lady Edith resurrecting her magazine writing, it is a complex movie to follow if you aren’t familiar with the TV series. With this film, there is an assumption you know the backstory of most of the characters. The 2 hour 5 minute movie is a bit like binge watching a few TV episodes, this time in a movie cinema.

I think this must be the last instalment in a very long family saga and if you have loved it so far, you will most likely adore the movie. If you aren’t a fan, it could be a bit hard going, unless you are into sumptuous scenery and glorious excesses of the 1920s. Like any Downton Abbey episode this movie certainly delivers when it comes to beautiful period costumes or grand sets.